Sistas Yoga Series gives you permission to show up for your Self.

Sistas Yoga Series is a 6-week experience of yoga, sisterhood, and connection. In a class of like-minded sistas, we open up to what our beautiful, bodacious, bad a** bodies can do in a yoga practice, learn to listen to our over-flowing minds during guided meditations and take a break from stress-filled lives with mindful breathing. Afterward, we gather in a SistaCircle where we share some of our “ahas” and “good lawds” we discovered during the practice.

Included in the 6-Week Series:

We meet on Sunday mornings at the Ama Wellness Yoga Studio in Baltimore, MD. To preserve the intimacy of the space, each session is only open to eight sistas. Secure your space here sis. 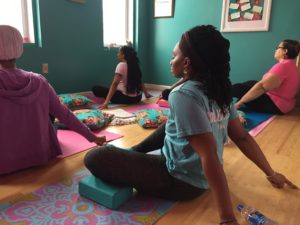 How it all began

In 2011, I fell in love hard…like really hard…with yoga and the yumminess it brought to my body, mind, and spirit. I had a consistent home practice but craved a community feel. So off I went on a quest around my city of Baltimore to find my “yoga home”. I practiced at damn near every yoga studio in town, and with each place I went to I couldn’t shake that irksome outsider feeling. Studio after studio I scanned the room looking for a brown face but alas, 9 out of 10 times, I was the only black women in the class. In a city where the population of African-Americans was over 60%, I found it hard to believe that we didn’t practice yoga in larger group settings.

My love affair with yoga was deepening and I had a yearning to share this love with others like me. Since I knew I was hard pressed to build a community from the classes I was attending, I had to do something. Which led me to leading five of my sister-friends in a vinyasa class in my apartment ‘s living room on a Sunday morning. And from there Sistas Yoga Sundays (SYS) was born. A short while later we found a new home at the serene Heart Nest Wellness Center where we held classes for 7 years. Now our sessions are held at the Bmore Empowered Center in West Baltimore. For over eight years, I’ve embraced hundreds of women as they entered my class rolled out their mats and flowed. My students come from many backgrounds, age groups, and share different faiths, but one thing remains constant, we are women and we are building a tribe.

embrace change this fall season and cultivate a resilient mindset

feel lighter in your body, thoughts and emotions this Spring

Release pains from past traumas and create space in your mind, body and spirit for freedom this year and beyond.

In our sister’s words…

“I did the 6WK sisters yoga series and it was amazing! It gave me healing that I didn’t know I needed…. taught me so many things about me, I experience sisterhood on another level(!!!) with people (who were at the time) complete strangers.”

“It was a time for me to reflect and just TAKE CARE OF ME.”

“There were a lot of things holding me back that I didn’t even know. It all came out during the practice.”

“Over the course of the 6 weeks I felt STRONGER and more of a CONNECTION with the sisters.”

“This class was an AFFIRMATION.”